GameStop Corp. is an American video game, consumer electronics, and gaming merchandise retailer. The company is headquartered in Grapevine, Texas (a suburb of Dallas), and is the largest video game retailer worldwide. As of 29 January 2022, the company operated 4,573 stores including 3,018 in the United States, 231 in Canada, 417 in Australia and 907 in Europe under the GameStop, EB Games, EB Games Australia, Micromania-Zing, ThinkGeek and Zing Pop Culture brands. The company was founded in Dallas in 1984 as Babbage’s, and took on its current name in 1999.

The company’s performance declined during the mid-late 2010s due to the shift of video game sales to online shopping and downloads and failed investments by GameStop in smartphone retail. In 2021 however, the company’s stock price skyrocketed due to a short squeeze orchestrated by users of the Internet forum r/wallstreetbets. The company received significant media attention during January and February 2021 due to the volatility of its stock price and the GameStop short squeeze. The company is now ranked 521st on the Fortune 500.In addition to retail stores, GameStop owns and publishes Game Informer, a video game magazine.

GameStop traces its roots to Babbage’s, a Dallas, Texas-based software retailer founded in 1984 by former Harvard Business School classmates James McCurry and Gary M. Kusin. The company was named after Charles Babbage and opened its first store in Dallas’s NorthPark Center with the help of Ross Perot, an early investor in the company. The company quickly began to focus on video game sales for the then-dominant Atari 2600. Babbage’s began selling Nintendo games in 1987. Babbage’s became a public company via an initial public offering in 1988. By 1991, video games accounted for two-thirds of Babbage’s sales.

Gary Kusin resigned as president of Babbage’s in February 1995 to start a cosmetics company. Daniel DeMatteo, formerly president of Software Etc., assumed Kusin’s duties and was promoted to president and chief operating officer of NeoStar. NeoStar chairman James McCurry was also appointed to the newly created position of NeoStar CEO. The company relocated from its headquarters in Dallas to Grapevine later that year.

NeoStar merged its Babbage’s and Software Etc. units into a single organization in May 1996 amid declining sales. Company president Daniel DeMatteo also resigned, and NeoStar chairman and CEO James McCurry assumed the title of president. In September of that year, after NeoStar was unable to secure the credit necessary to purchase inventory necessary for the holiday season, the company filed for Chapter 11 bankruptcy and appointed Thomas G. Plaskett as chairman while James McCurry remained company chief executive and president.

The leadership changes were not enough and in November 1996 the assets of NeoStar were purchased for $58.5 million by Leonard Riggio, a founder of Software Etc. and chairman and principal stockholder of Barnes & Noble. Electronics Boutique had also bid to purchase NeoStar, but the judge presiding over NeoStar’s bankruptcy accepted Riggio’s bid because it kept open 108 stores more than Electronics Boutique’s bid would have. Approximately 200 retail stores were not included in the transaction and were subsequently closed.

As the name suggests, Joking Hazard is a party game where you can compete with your friends for…
byadmin 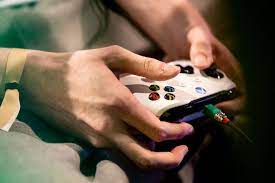 In his book, Why We Buy: The Science of Shopping psychologist and security camera footage enthusiast Paco Underhill reported on…
byadmin

television is one of the most popular forms of entertainment in almost every home these days. there are…
bymichael343