Seeking Solace in Gambling: The Cycle of Gambling and Intimate Partner Violence Against Women Who Gamble

This study explored women’s gambling in response to male intimate partner violence (IPV). Twenty-four women were recruited through service providers and online advertising. All women had been victimised by IPV and all experienced problems relating to the gambling on electronic gaming machines (EGMs). Thematic analysis of their in-depth interviews identified three major themes. The main pattern of gambling and IPV (Theme 1) was where ongoing coercive control preceded the woman’s gambling. Situational violence in response to gambling was also observed. Regardless of temporal sequence, a self-perpetuating cycle of gambling and IPV victimisation was typically apparent, with both issues escalating over time. Reflecting severe traumatic violence, push factors from IPV that motivated the women’s gambling (Theme 2) included physical escape, psychological escape, hope of regaining control over their lives, and gambling to cope with the legacy of abuse. Pull factors attracting these women to gambling venues (Theme 3) appeared to have heightened appeal to these victims of IPV. These included venues’ social, geographic and temporal accessibility, allowance for uninterrupted play on EGMs, and the addictive nature of EGMs. These push and pull factors led to these women’s prolonged and harmful gambling while exacerbating their partner’s violence. Concerted efforts are needed to assist women in this cycle of IPV and gambling, prevent violence against women, and reduce harmful gambling products and environments.

Research has identified three main patterns linking IPV and gambling. One is where the person who gambles perpetrates IPV. This violence may arise from the gambler’s anger and frustration about gambling losses, expressed as an immediate aggressive response to financial stress and crisis (Afifi et al., 2010; Korman et al., 2008; Muelleman et al., 2002; Suomi et al., 2019). A second pattern is where the person who gambles is a victim of a partner’s abuse which may arise from loss of trust, accumulated anger, and conflict over stresses caused by the victim’s gambling (Korman et al., 2008; Suomi et al., 2013). These two patterns have been described as situational couple violence (Johnson, 2008) triggered by the immediate effects of gambling (Suomi et al., 2019). However, these violent incidents can also occur in contexts of coercive control and non-gambling related violence; that is, gambling can intensify violence already occurring in abusive relationships (Hing et al., 2020a). A third pattern is where victims gamble to cope with past or current IPV (Afifi et al., 2010; Hing et al., 2020a; Suomi et al., 2019). In their study of 212 clients of gambling help services, Suomi et al., (2019) observed this pattern only amongst women and suggested their abuse was likely to be severe and traumatic and linked to a pattern of coercive and controlling behaviours by their partner. Suomi et al., (2019) indicated the need for further research to better understand this pattern of IPV and gambling amongst women. The current study helps to address this need by focusing on women victims of IPV who use gambling to escape from or cope with IPV.

IPV has immediate and lasting impacts on women which may increase their likelihood of gambling. Women victims are at risk of mental health problems, including depression, anxiety and post-traumatic stress disorder (PTSD) (Dillon et al., 2013; Lagdon et al., 2014). Women experiencing coercive control may live in a state of hypervigilance and fear (Felson & Outlaw, 2007; Gondolf & Heckert, 2003). Women victims also have an elevated risk of physical health problems (Dillon et al., 2013; Laskey et al., 2019), and substance use disorders (Cafferky et al., 2018; Devries et al., 2014). The self-stigma of IPV victimisation and a partner’s controlling behaviours can lead to social isolation and loneliness (Laskey et al., 2019). IPV often has negative financial consequences, including economic abuse (King et al., 2017; Ulmestig & Eriksson, 2017). These impacts of IPV on women may motivate their use of gambling to cope with these difficulties, and to provide a direct escape from the violence itself.

Women’s gambling has been widely researched, although not in the context of IPV. Of note is women’s preference for playing electronic gaming machines (EGMs), often for emotional relief from stressful life circumstances, boredom, loneliness, anxiety and depression (Grant & Kim, 2002; Hing et al., 2017; Thomas et al., 2011a). While some men also gamble for emotional escape, women are more likely to be seeking respite from violent partners, stressful relationships, caring responsibilities, social isolation, emotional distress, mood disorders and life worries (Saugeres et al., 2012; Thomas & Moore, 2003). Gambling may also be used to cope with violence-induced trauma, reflected in higher rates of abuse amongst individuals with a gambling disorder (Afifi et al., 2010; Andronicos et al., 2015; Kausch et al., 2006). EGM play assists avoidant-based coping because it facilitates dissociation and trance-like absorption. Players describe this state as “the zone” where reality is suspended, life’s problems lose importance, and players can numb pain and worries (Livingstone, 2005; Schüll, 2012). The goal in “the zone” is to sustain play to extend time-out from a difficult reality (Schüll, 2002). However, while EGM play may help women to cope with the impacts of IPV victimisation, it can lead to dependence and harm, and exacerbate the risk of further violence. Women have described gambling to cope with abusive intimate relationships, and sometimes experiencing further violence after subsequent gambling losses (Centre for Innovative Justice, 2017; Saugeres et al., 2014).

Women also find EGMs attractive because they are highly accessible. In Australia, nearly all suburbs have several hotels and clubs with EGMs which open for up to 18 h every day (Hing et al., 2017). They are often the only venues open late at night. EGM venues are also socially accessible for women, where they feel socially accepted when playing EGMs and can expect to be left alone (Thomas et al., 2009, 2011b). Security personnel, employees and other patrons enhance women’s sense of safety. Venue staff are trained to be welcoming but non-intrusive and to not question a patron’s gambling (Hing et al., 2020b; Rintoul et al., 2017). In Victoria Australia, the Royal Commission into Family Violence (State of Victoria, 2016) found that women sometimes escape to gambling venues because they are the only safe, welcoming refuge to avoid a partner’s violence; yet cautioned that venues are not safe if this leads to harmful gambling and the risk of more violence.

While research has found that some women gamble to cope with IPV Centre for Innovative Justice, 2017; Saugeres et al., 2012; State of Victoria, 2016; Suomi et al., 2019), little is known about the interaction of IPV and gambling in this context and the experiences of affected women. The current study aimed to explore women’s gambling in response to IPV victimisation by drawing on their lived experience. Specifically, it explored the following research questions: (1) What is the nature of the relationship between gambling and IPV when women gamble in response to IPV victimisation? (2) How does IPV victimisation contribute to women’s gambling? and (3) Why are gambling venues attractive as “safe spaces” for women victims of IPV?

Given the paucity of related research, a qualitative study was undertaken to explore the research questions. After obtaining ethics approval from the lead author’s institution (no. 20,852), participants were recruited through service providers working in family violence, relationship counselling, gambling help, financial counselling and multicultural agencies, as well as through paid advertising on GoogleAds and Gumtree. Potential participants were directed to a dedicated website which contained an information sheet that explained the study was:

The information sheet also explained provisions for confidentiality and anonymity, voluntary participation, contact details for help services, an informed consent preamble, and payment of a $40 shopping voucher as compensation. Potential participants could register on the website or by contacting a nominated researcher. This researcher then contacted the woman to check she met the eligibility criteria described above, and if so, to arrange an interview time.

Twenty-four women participated in interviews, with nearly half (11) aged below 40 years and the rest (13) aged 40 years or over (Table 1). Most (19) resided in metropolitan areas. The sample included women from five Australian jurisdictions, mainly from the most populous eastern states: Queensland (9), New South Wales (7) and Victoria (4). All 24 women reported EGMs (also called poker machines and pokies in Australia) to be their most harmful form of gambling.

THE BEST SLOTS STRATEGY Most of the time, if you are a loyal customer of that site you…
byadmin

An effort to ban gambling sponsorships of sports teams in the UK has a lot of momentum. However, a new…
byjohn paul 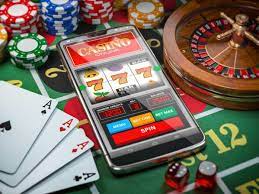 In recent years, gambling has become widespread, which was especially facilitated by their move from real ground-based halls…
byadmin

Now it is incredibly easy to find 777 slots with a withdrawal of money. To do this, you do…
byadmin